Behind the Lens: Powerful Partnerships
By Hugh Johnson*
From the Field

Behind the Lens: Powerful Partnerships

As a photographer with the International Mission Board, I have had the privilege of working alongside Southern Baptist Disaster Relief (SBDR) partners on numerous projects in Asia.

For more than 50 years these “yellow shirt” volunteers drawn from many state conventions have been among the earliest responders to natural disasters, both at home and around the world. In fact SBDR has grown to become the third largest disaster relief organization in the U.S. with nearly 70,000 Southern Baptists across the country currently trained to work in disaster situations. 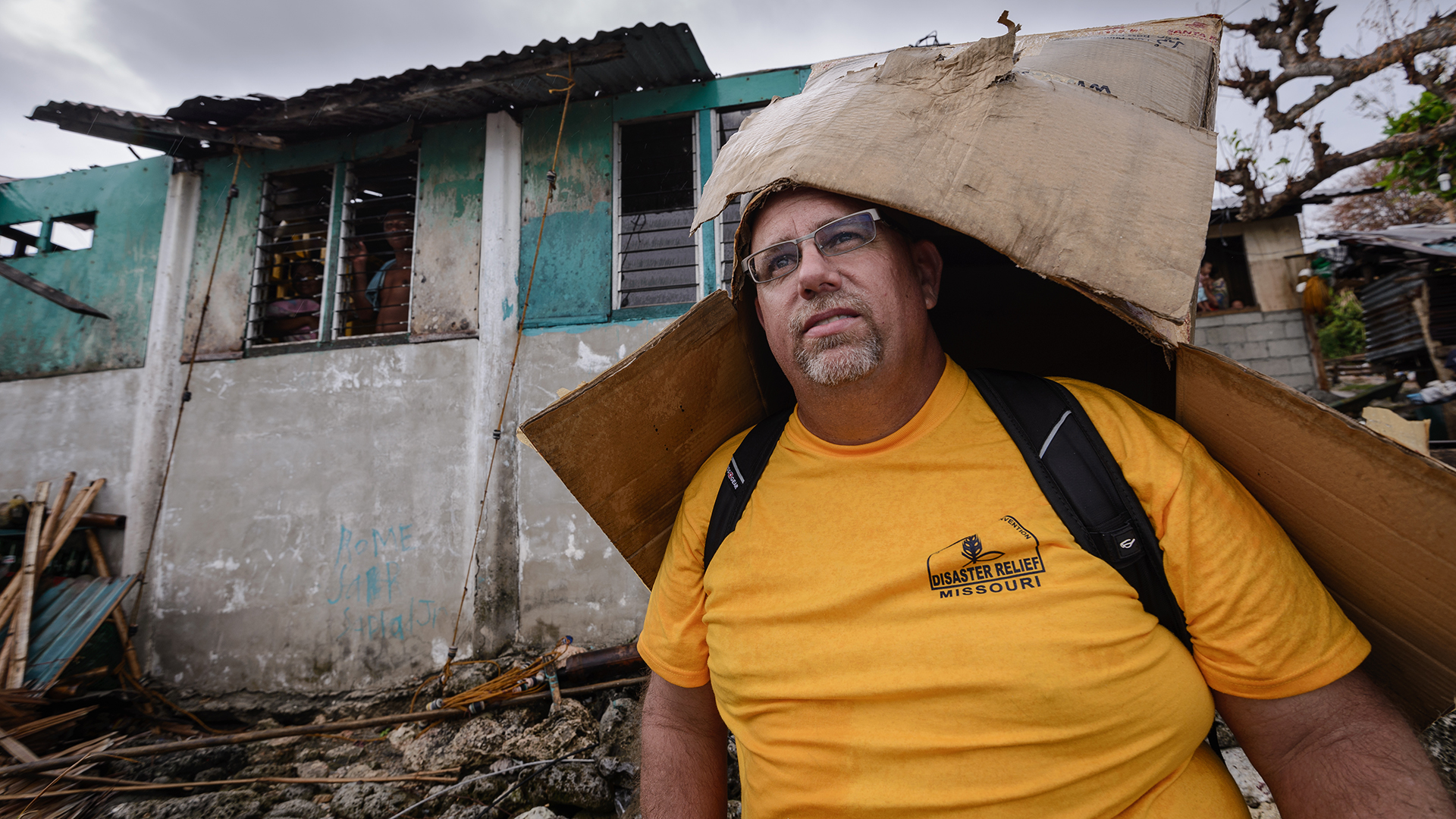 In this photo taken during the aftermath of Typhoon Haiyan, SBDR volunteer Dwain Carter uses a cardboard box as a makeshift shelter for protection from a sudden tropical downpour during a food distribution at Gibitngil Island, a small island off the coast of northern Cebu. Carter served as State Disaster Relief Director for Missouri when this picture was taken. He later served as State Disaster Relief Director for Texas Baptist Men before becoming pastor of Tilden Baptist Church.

Their impact on global missions work has been considerable. In 2020 alone, Southern Baptist volunteers worked over 457,000 hours; prepared almost 720,000 meals; presented the gospel nearly 5,500 times; and have seen more than 800 professions of faith.

When Typhoon Haiyan (locally known as Yolanda) tore through the Philippines on Nov. 8, 2013, more than 600,000 people were displaced and a death toll that climbed to more than 5,000. More than 13 million people were affected by the storm – 4.4 million of them displaced, according to United Nations reports. More than 1 million homes were damaged or destroyed. Children hold up signs asking for relief assistance on the edge of the main road in Tabuelan municipality on northern Cebu island. This area was one of the most seriously impacted by Typhoon Haiyan.

The IMB responded immediately alongside SBDR and national Baptist partners in the Philippines and other Asian countries to bring food, water and basic life necessities to these communities. Together they demonstrated how effectively these groups could work as part of a larger, global disaster response by the international Baptist community that multiplied Southern Baptists’ impact.

Journalists covering this event (based out of Cebu city, Philippines) produced numerous stories, photo galleries and interactive features, with an emphasis on storytelling and strong visual media to walk viewers through the entire disaster relief process as it unfolded day by day. Media was used to introduce people and places impacted by the disaster. New stories were uploaded from the field almost daily to convey a sense of immediacy and involvement by the viewer, and social media was used to share these new stories as quickly and widely as possible. The stories also served to educate churches and individual supporters that disaster relief is a long-term process that extends far beyond the initial recovery efforts that get covered by the world’s press. In addition to immediate disaster relief needs, there is an ongoing need for long-term work and volunteers.

Every time I’ve had the opportunity to work alongside these volunteers, I have been struck by how faithfully these men and women modeled Paul’s admonition in Colossians 3:12 where he writes “Therefore, as God’s chosen people, holy and dearly loved, clothe yourselves with compassion, kindness, humility, gentleness and patience.” And his words in Colossians 23-24, “Whatever you do, work at it with all your heart, as working for the Lord, not for human masters, since you know that you will receive an inheritance from the Lord as a reward. It is the Lord Christ you are serving.” Driving through the destruction caused by typhoon Haiyan in northern Cebu island, a glass motto on the car’s dashboard provides a comforting reminder that “I can do all things through Christ who strrengthens me.” (Philippians 4:13).

Learn how you and your church can get involved with disaster relief at https://www.namb.net/southern-baptist-disaster-relief/ or at www.sendrelief.org.

You can read more about the Typhoon Haiyun disaster response in this 2013 article by Baptist Press News at http://m.bpnews.net/41569/typhoon-relief-brings-hope-to-rural-filipinos

Visit https://www.imb.org/photos/ to see images from around the world by IMB photographers.

Hugh Johnson* is a photographer for the IMB.