Give Now
Malawian Baptist women empowered, equipped for ministry
By Caroline Anderson
From the Field

A woman’s worth is rooted in who God says she is, International Mission Board missionary Jamie Schilt shared with the Malawian women seated before her in the seminary classroom.

“God says He created mankind, male and female in His image. That means that you’re a female made in God’s image. And you have value simply because you’re created in God’s image,” Schilt continued.

Malawian women heard these truths at the Baptist Theological Seminary of Malawi. Schilt echoes IMB’s passion for all people – men and women – to understand Scripture in their language and grow as disciples who can teach God’s Word to others. 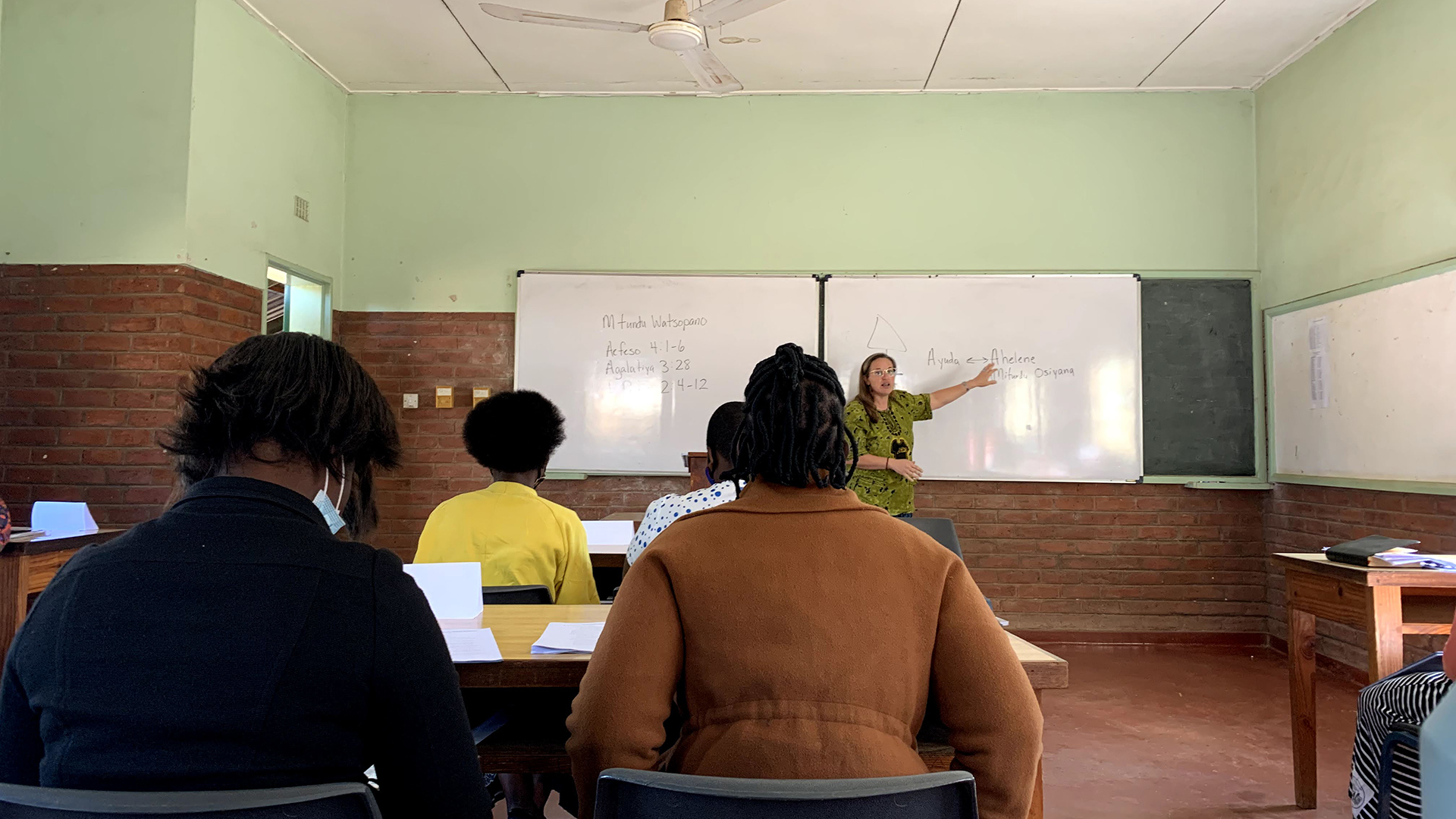 IMB missionary Jamie Schilt teaches Malawian women in the Baptist seminary wives’ classes at the Baptist Theological Seminary of Malawi. The wives of seminary students travel to the campus to take classes once a year. This year, Schilt is teaching classes on how to read the Bible, women in the Bible and biblical womanhood. IMB Photo

For one week every year, pastors’ wives of current seminary students and alumni are invited to take classes at the seminary to help them face the challenges of ministry and find support and fellowship in each other. Classes include studying the Bible, teaching from a passage of Scripture and biblical womanhood. The women learn about leading programs for Baptist women and girls. Crafting and cooking classes are also offered, as these are valued skills in their culture.

Schilt teaches several classes as part of the program. One focuses on how to read and understand the Bible. The course introduces the Bible’s authors and genres, how to determine who the passage of Scripture addresses, how to interpret Scripture in context and how to apply it in the present.

After the class, Schilt said the women are eager to teach women in their own communities to do the same.

Malawian women also learn how women served in the Bible and how they contributed to the New Testament church.

Her class on biblical womanhood begins with the creation story and walks through Scripture to show women how to serve the family, society and the church. The class also delves into the implications Malawian culture has on the roles of women and how Scripture can speak into cultural expectations.

Historically, and still among some rural communities, due to declining birth rates, Malawians depended on a woman’s fertility as central to the survival of tribes and the nation. Schilt said witchcraft practices in rural and remote areas also are tied to women’s fertility.

These historical precedents are a heavy weight on society as women in Malawian culture often are treated like second-class citizens. Schilt said the classes are meant to empower and affirm a woman’s worth and value in the eyes of God. She shares with the women that they have a role to play in the church. A woman’s value is not what she provides. Jamie Schilt, far left, poses for a photo with the women participating in the Baptist seminary wives’ classes at the Baptist Theological Seminary of Malawi. The women come once a year to the seminary for classes ranging from biblical exegesis to programs to minister to youth in their communities. Schilt and her family serve with the IMB in Malawi. IMB Photo

Malawi has a national version of Woman’s Missionary Union and Girls in Action (GA). During their week on the seminary campus, the women learn how they can start WMU and GA programs.

When the women return to their churches after their week at the seminary, they are often the most biblically educated woman in the church, and will be responsible for women’s programs.

Participants in this program receive a certificate of ministry for attending classes over a two-to-four-year period.

Women enrolled full-time in the seminary often encounter difficulties and stalemates in their home churches. When the women graduate and return to their churches, they are sometimes overlooked and underutilized. Schilt said some leaders are worried women will usurp their authority. In an area where higher education is not the norm, an educated woman can breed jealousy in these contexts, Schilt said.

When Schilt teaches, she shares how their education is a way to serve their church and not place them ahead of anyone else. She asks them to consider how they can use their education to build up the body of Christ.

However, if church leaders do not have the same understanding, women face difficulties using their gifts in the church. Chris and Jamie Schilt and their children pose for a photo on Easter Sunday. The Schilts serve in Malawi as theological educators. IMB Photo

Schilt’s husband, Chris, teaches at the seminary. He spreads the message of a woman’s value in the church. His classes imbue the same messages as the women’s program.

These conversations led to the creation of a holistic training for men and women.

Chris and Jamie worked with a Malawian family to develop a biblical family curriculum. They will soon host their first training. This provides a forum for men and women to learn and grow in their understanding of a biblical model for church leadership and ways for women to serve.

Malawi Team
$543 of $275,000 goal
Give Now
or
Share Now
IMB is a 501(c)3 charity. Your gift is tax-deductible as allowed by U.S. law. No goods or services will be provided in exchange for this gift. The IMB handles all gifts according to government regulations and is professionally audited each year.

Join the Schilts in praying for the women who participate in the yearly classes.