Give Now
Go set a watchman: North African guard ushered gospel to the lost
By Tessa Sanchez
From the Field

The watchman. He was the grandfather who loved spy novels, Manchester United and coffee.

Dawit was Matt and Gretchen Clay’s door to communities with no gospel presence. He made introductions for the International Mission Board missionaries and translated from the trade language to the regional language. Dawit helped the Clays begin their ministry in the area by translating for their community development projects.

“He ushered us in,” Gretchen said. Dawit was an avid coffee drinker. He had a favorite mug that he always used for his coffee. IMB Photo

When the Clays moved to their first city of service, they didn’t know anyone. They met Dawit, a North African man with exceptionally good English and a caring heart. Dawit began working as a guard, or watchman, as they are called in the area, for another IMB family and later began working for other IMB families, including the Clays.

It’s expected that people in this culture will employ a watchman to not only guard the property but be eyes and ears in the community.

Over a 13-year period, Dawit helped eight IMB families and 16 single, short-term missionaries. He showed every new missionary around town, ferrying them on a three-wheeled vehicle, to places like the market, where he showed them how to buy vegetables and the best places to eat and buy local souvenirs.

Dawit could tear through Jason Bourne-style spy novels. In the 1970s, the country had a change in government, and Dawit was imprisoned for his political beliefs. He had a surplus of free time in prison, so he read. And read. His love for reading blossomed, as did his English proficiency. Matt and Gretchen ran out of paperback books to give him. Another IMB family bought him an electronic reading device, and every month, Gretchen added 12 books. He’d finish all 12 books in a month.

With his high level of English, he was overqualified for the security job, but he saw serving as a watchman as a way to serve and give back to his community. 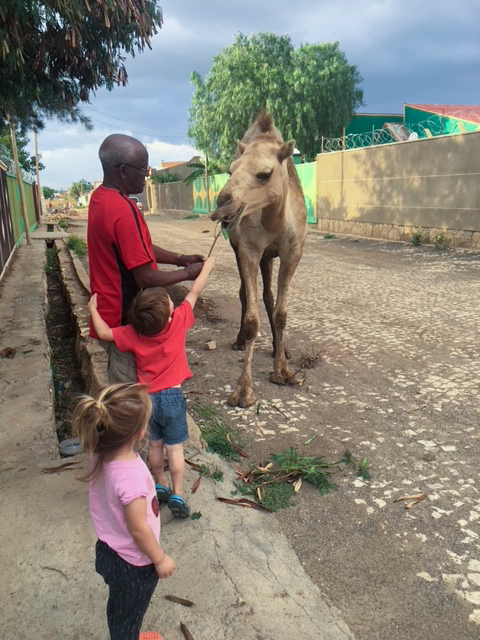 His translation for their community development projects and his presence brought validity to their ministry.

“So was he a security guard? Yes, except he really was more than that. He was our liaison or a conduit into the community,” Gretchen said.

He was also family.

Missionary kids grow up thousands of miles from grandparents, and Matt and Gretchen’s children called Dawit “Grandfather,” and the Clays and other IMB adults called him “Father.” An avid coffee lover, Gretchen remembers sharing many cups of coffee with him.

He poured his life and heart into helping, serving and being a friend and family member.

The Clays appreciate Southern Baptists’ generosity in giving to the Lottie Moon Christmas Offering® because it allowed them to pay Dawit’s salary, which supported not only him but his four children.

“It’s not just us that Lottie helps to keep over here. It’s the people around us who are helping us stay here. To be honest, without him helping us, we wouldn’t have been able to thrive as much as we’ve thrived over here on the field.”

Where you go, I’ll go

When the Clays felt the Lord calling them to move deeper into the region where their people group lived, they told Dawit he was welcome to move with them, but they weren’t requiring it, and they blessed him to retire whenever he saw fit. Dawit holds one of the Clay’s children. He was much more than a security guard; he was a family member. IMB Photo

The people in the region were of a different ethnicity and religion than Dawit. Gretchen said it can be difficult for people to move into an area where they are not the ethnic majority.

The Clays asked if Dawit would help them move some of their things to their new house. On the trip, Dawit told the Clay’s oldest daughter, “When I move here, I’m coming back with all of my stuff.”

“If you’re going, I’m coming,” he told Matt and Gretchen.

He lived with the Clays for the past few years in a standalone room next to their house and was a daily part of their lives. The TV in his room was on every time Manchester United played. He relished his hours watching English Premier League soccer.

This summer while the Clays were in the U.S., Dawit unexpectedly passed away from a heart attack. His death was devastating. All the missionaries he helped, whether still in the country or back in the U.S., were grieved.

For two months, Gretchen didn’t go into his room. It’d been cleaned out by his children, but the grief was still too raw. Gretchen Clay found this note, written by Dawit, in his room. It confirmed that he had committed his life to Christ. IMB Photo

When she did go in, most of what was left were electrical plugs. She picked up a piece of paper with random numbers jotted down. She flipped it over and found a note that brought the answers she needed, dispelling any doubt.

“I’ve been working with a family for many years, this American family, I’ve really loved my work with them. They are good people. I like them and their children. They are very good for me. They believe in the one, true God, in Jesus Christ, me too,” the note read.

Gretchen said it confirmed that he had indeed committed his life to Christ.

“He was so special to us, but to know that we were special to him, but more importantly that he believed in Jesus, and we know where he is today because of that [note],” Gretchen said. “It was just a huge encouragement to know that his faith was strong. So many people had poured into him for so many years.”

Bible Stories for the Unreached of Northern Africa
$13,140
Give Now
or
Share Now
IMB is a 501(c)3 charity. Your gift is tax-deductible as allowed by U.S. law. No goods or services will be provided in exchange for this gift. The IMB handles all gifts according to government regulations and is professionally audited each year.

Gretchen thanks you for your faithful gifts. They had a ripple effect, blessing them, Dawit and all the people they served.

Some names may be changed for security purposes.