Give Now
OBU degree furthers partnership with IMB, increases work among refugees
By Caroline Anderson
From the Field

Oklahoma Baptist University recently introduced a new degree, a Bachelor of Arts in Global Marketplace Engagement, that will include a semester-long internship during the student’s junior year. The degree incorporates a choice of seven areas of academia and includes the development of marketplace skills and a cross-cultural component. R. Bruce Carlton, professor of Cross-Cultural Ministries at OBU, developed the degree and oversees the program. Carlton and his wife, Gloria, served for 20 years with the IMB in Asia.

The university, located in Shawnee, Oklahoma, has a long history of partnering with the International Mission Board. In addition to spring break and summer short-term trips, students pursuing the university’s new degree will join IMB missionaries around the globe during a semester-long internship. Some of these internships will plug OBU students into refugee ministries. The first cycle of students began the program fall of 2019. 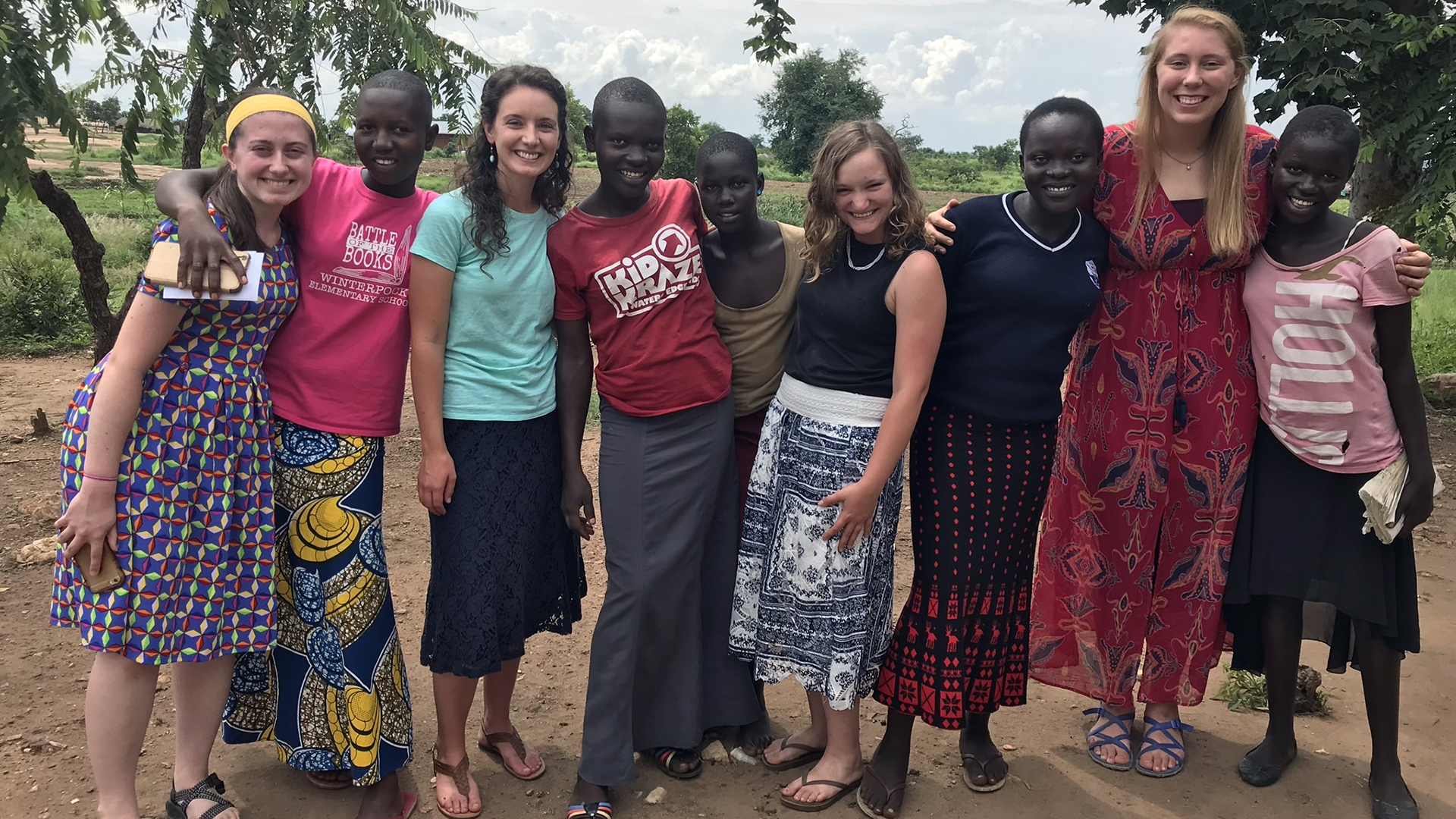 Oklahoma Baptist University students spend time with refugees in a Ugandan refugee camp. The students traveled to Uganda on one of the university’s many short-term trips, known as GO Trips. OBU is actively involved in refugee ministry with the IMB.

“One part of our mission statement is to engage a diverse world,” said Joy Turner, the director of Global Mobilization and professor of Christian Ministry at OBU. “So I think connecting that to global outreach and study abroad and local ministry, each of those pieces fit within that [mission statement].

“We’re moving people along in their walk with Jesus while they’re here, and we see this global outreach piece as just one piece of that,” Turner said.

Turner is an OBU alumna and served with the North American Mission Board in Hawaii before moving back to Oklahoma to work for OBU.

Engaging the nations has long been a part of the OBU campus experience. Students at OBU can choose to participate in short-term trips, called GO Trips, during the summer. The university also provides a January-term trip lasting three weeks and a spring break trip. Turner said OBU sends somewhere between 200 and 250 students on GO Trips each year.

For their internship, students in the Global Marketplace Engagement program may choose to return and serve with the IMB workers they ministered alongside during their short-term trips.

OBU has a partnership with IMB’s Northern Africa and the Middle East region, and every year, several of the GO Trips are to the people groups represented there. Turner said some students who are enrolling in the Global Marketplace Engagement degree are expressing an interest in returning to Northern Africa for their internship.

Turner said it is fulfilling to come alongside students during their missions’ journey, travel with them on GO Trips, and see them thrive overseas and come back the following year wanting to serve again. Many former OBU students have gone on to serve with the IMB after graduating.

“It’s part of the long-term fruit of the work that we do now,” Turner said. An Oklahoma Baptist University student plays the violin for refugee children in a refugee camp in Uganda. The university students traveled to the camp on one of OBU’s short-term trips, known as GO Trips.

Some of the Global Marketplace Engagement internships will include ministry among refugees. Turner said OBU’s connection with refugee ministry is recent.

Each academic year, OBU hosts global consultants from the IMB in a year-long position. Barry and Sarah Holtman* were recent global consultants at OBU. The Holtmans coordinate IMB’s Global Refugee Network. OBU partnered with the Holtmans when they previously served among an unreached people group in East Asia.

During their tenure as consultants, the Holtmans introduced simulations to introduce students to the plight of refugees. Turner said the simulations gave students a heart for refugees. Through the relationship with the Holtmans, OBU began connecting some of their GO Trips to IMB workers involved in refugee ministries in Uganda, Greece and Colombia. The Global Marketplace Engagement degree will further OBU’s involvement in refugee ministry.

In addition to the 10-week orientation Turner leads for students participating in overseas trips, any student ministering to refugees during their internship will take part in a 10-hour trauma healing training recommended by the Holtmans.

“The sending program that Dr. Turner has developed at OBU invests in and nurtures amazing students who are highly qualified and committed to the nations,” Sarah said. “​We can always with confidence recommend OBU teams to our field personnel and ​know from experience that the students they send will add tremendous value to the work on the ground.”

Turner said many of the students who are involved in OBU’s GO Trips and who will be majoring in the Global Marketplace Engagement degree have been dreaming about being involved in missions since they were teenagers. OBU graduate Caroline Reel was one of those students.

“I knew that the Lord was calling me to mission work since I was little,” Reel said. “When I looked for colleges, I knew I wanted to learn about how to reach oral learners with the gospel. OBU had an orality studies program that combined anthropology, folklore and missiology, and it was exactly what I was looking for.”

Reel now serves with the IMB in Uganda and ministers among Sudanese and South Sudanese refugees.

As a single woman, Reel says she is uniquely placed to disciple women who haven’t had the opportunity to dig deep into their faith.

“The hours with these ladies let me build relationships with them, and as I get to know them, we talk about faith. We work through Bible story sets to give them unique opportunities to learn their Bibles, but also to personally engage with and obey the truths they’re learning,” Reel said. “These women are believers, with strong ties into Muslim communities here. Our hope is to equip and mobilize them to begin sharing and Bible storying on their own to reach their neighbors with the gospel.”

“OBU gave me more than just the knowledge I needed to equip me to work overseas,” Reel said. “So many professors became not just teachers, but mentors. They traveled with us on GO Trips to teach and model along the way. They helped me practice what I was learning both overseas and in our own backyard in Shawnee. They spent so many hours outside of their classroom time to pour into students, and it was a blessing I have thanked the Lord for so many times.”

Students majoring in Global Marketplace Engagement will have the opportunity to serve among refugee communities. Interested in learning more about OBU’s new degree? Click here to learn more.

Caroline Anderson is a writer for the IMB serving in Southeast Asia.