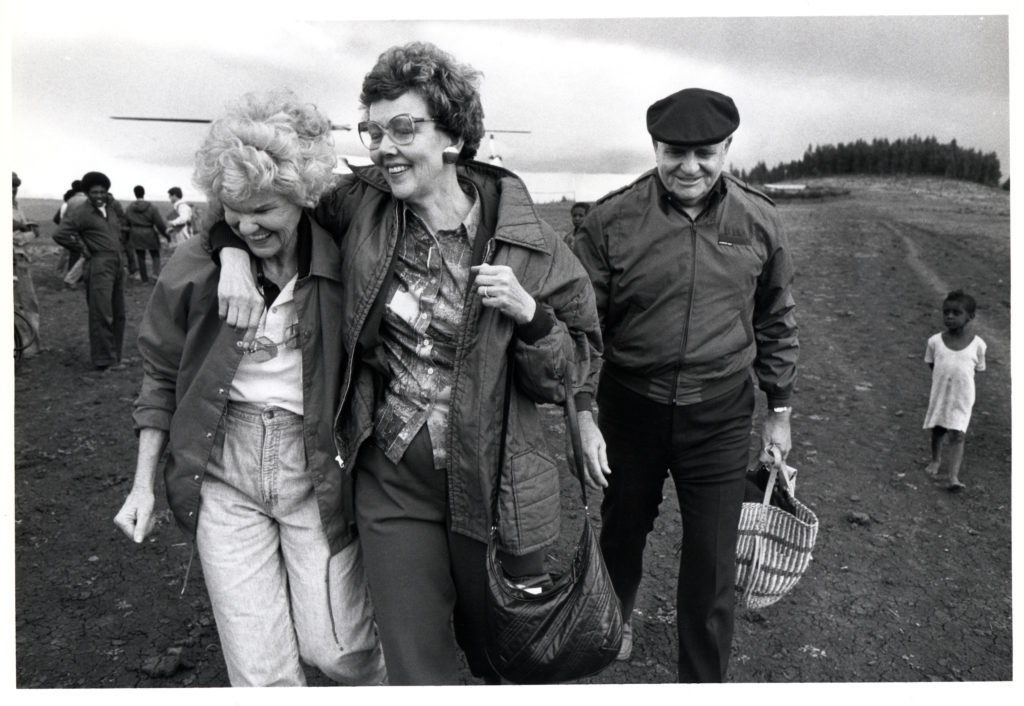 Helen Jean Parks enjoys a reunion with Mary Saunders, former missionary nurse and staff wife, after arriving with her husband, Keith, to visit one of Southern Baptists’ feeding stations in drought-stricken Ethiopia in 1986. IMB photo

The former Helen Jean Bond, born in Abilene, Texas, and her husband were appointed Southern Baptist missionaries to Indonesia in 1954 and served there until 1968. Her commitment to international missions shaped her service as the couple returned to the United States for Keith to join the home office staff and through his tenure as FMB president from 1980 to 1992.

Jerry Rankin, who succeeded Keith Parks as IMB president and who also served in Indonesia, said he best remembers the couple as mentors and encouragers when Parks served as area director for Southeast Asia. “Helen Jean was especially outgoing and relational, given to hospitality and showing interest in our family,” he said. “She readily shared spiritual insights and advice out of her own missionary experiences but was not reluctant to voice strong personal opinions relative to mission strategy and policies as well.”

Helen Jean was never in the background, he said, “but was always alongside Keith providing counsel and support in his various leadership roles.”

The Parkses served 14 years in Indonesia. After language study, they did evangelistic work and served on the faculty of the Baptist Theological Seminary of Indonesia in Semarang, Java, where Helen Jean taught music and religious education. She also led the Indonesian seminary choir, worked in small churches training Indonesians as teachers and held conversational English classes with Muslim faculty wives of the Diponegoro State University.

They moved to Richmond in 1968, when Keith joined the home office staff to lead work in Southeast Asia. In 1975 he was named director of the Mission Support Division and in 1979 was named executive director-elect. He became executive director (later changed to president) on Jan. 1, 1980.

Although Helen Jean had to resign as a missionary when her husband joined the home office staff, she never relinquished her missionary calling. She actively promoted missions, interacting with constituents and relating to missionaries from her own experience. Parks received the Bachelor of Arts from Hardin-Simmons University, Abilene, Texas, and the Master of Religious Education from Southwestern Baptist Theological Seminary, Fort Worth, Texas. She received the Distinguished Alumni Award from Hardin-Simmons University in 1987 and was honored by the Logsdon School of Theology in 2007 with the Jesse C. Fletcher Award for Distinguished Service in Missions.

She also authored the book, “Holding the Ropes: Intercessory Prayer for Missions.”

Before her missionary appointment, Parks was a Baptist student worker in Huntsville, Fort Worth and Houston, Texas, and Springfield, Missouri. She also was youth and music director at First Baptist Church, Henrietta, Texas, and part-time reporter for the Abilene (Texas) Reporter-News. Keith and Helen Jean Parks entertain a group of missionary kids in their home during MK Weekend at Thanksgiving during his tenure as FMB president. IMB photo