The South Sudanese people who live in the Rhino Camp Refugee Settlement in Uganda know Deborah* is an outsider. They can see it on her skin. It’s Liberian—lighter than theirs, a fact that wasn’t erased by the years she lived in South Sudan married to a South Sudanese man.

But the scars on her heart are the same as theirs—they can see that too. 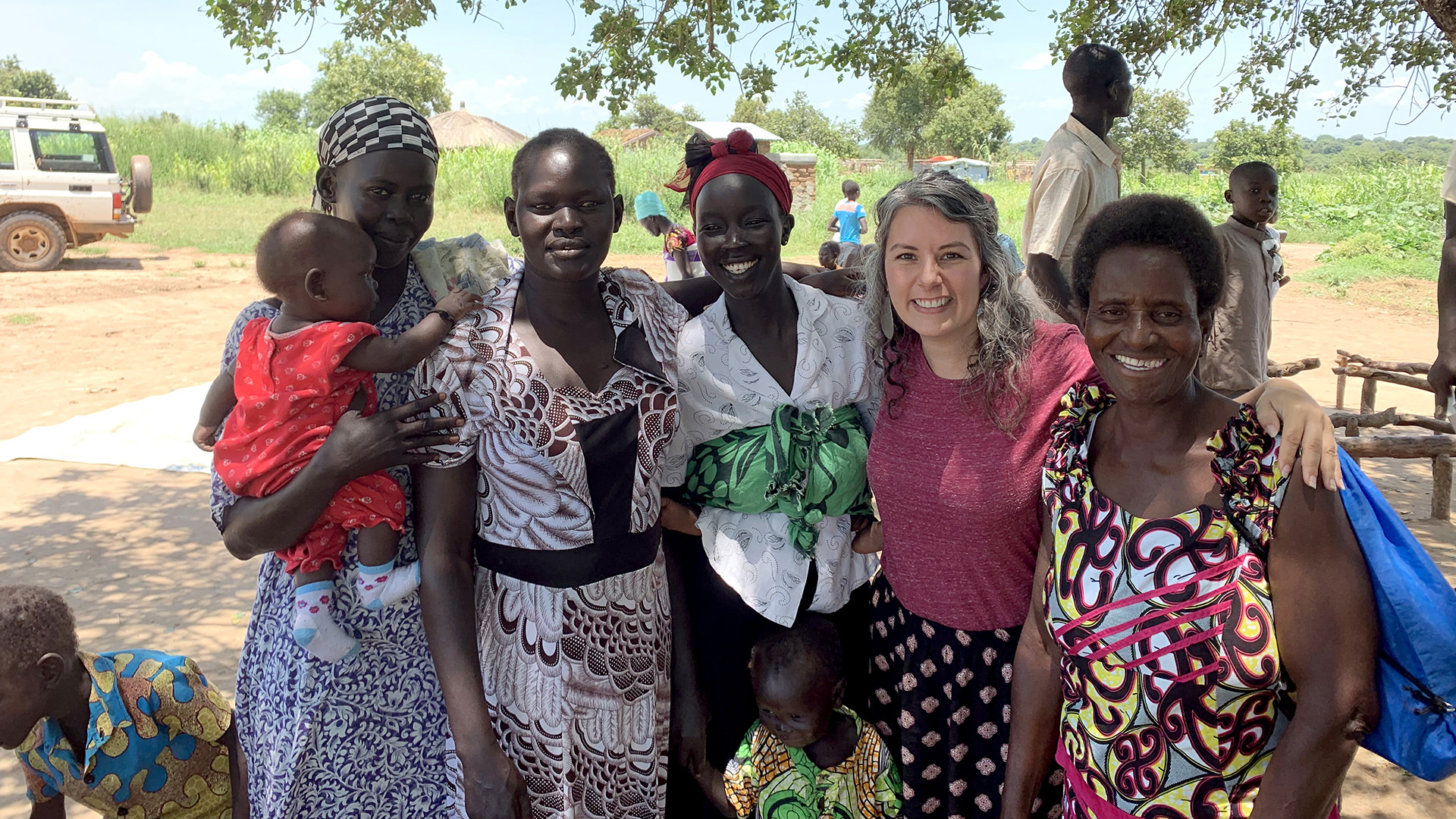 (From right) Deobrah*, a Christ follower who fled from civil war in the country where she lived, now helps IMB missionary Rebecca Shapley with spreading Bible stories throughout the Rhino Camp Refugee Settlement in Uganda. The stories of people from the Bible who also experienced trauma brings hope to people who have gone through tragedies of their own as they left their homeland. (*Name changed)

“She really is like one of them,” said Rebecca Shapley, who along with her husband, Tyson, serves as an International Mission Board missionary near the camp.

Deborah fled there, same as the other refugees did. In the Rhino camp, more than 120,000 people live together with the scars they brought with them. The camp was opened in 1980 and expanded when the Second Sudanese Civil War started a few years later and raged on for more than two decades.

And as Tyson worked with ministry partners to provide housing and wells and meet other physical needs there, a singular need kept rising to the top again and again—trauma care.

The Shapleys—whose sending church is Harmony Baptist Church in Weatherford, Texas—have heard stories of mass casualties. Some of the refugees are from places where rebel groups came in and opened fire.

“We’ve also heard stories of specific people being targeted for their beliefs,” Tyson said. “Their houses are set on fire. Their things are set on fire. They’ll have siblings who are killed or kidnapped, women are raped, children are kidnapped to become child soldiers. If you can name it, it’s probably happened to this group of people.”

And everywhere the Shapleys went, they heard and saw the need for someone to come alongside the refugees and help them walk through it. So when the couple got hold of a resource called New Hope, they said they saw it as a game changer.

The New Hope model is a seven-week small group curriculum that teaches one story to the group each week in a way that it can be passed on orally. Each story addresses someone from the Bible who faced trauma and talks about how God interacted with them through that tragedy. From mass killings to rape, the women of the Rhino Camp Refugee Settlement in Uganda have witnessed and experienced extreme trauma as they fled their home country. But many are finding hope through the New Hope trauma healing curriculum, a set of Bible stories IMB missionaries are spreading orally in the camp with the help of national partners.

For example, the story set starts with Joseph, a man who had the favor of God and his father, but was then sold into slavery by his brothers, Rebecca said.

“Through each step in the life of Joseph you see hardship after hardship, but the Bible tells us how God had favor on Joseph and he was with him the whole time,” she said. “Just as with Joseph, we see how God is using their suffering for the salvation of many.”

She said it gives them hope to hear that the Bible talks a lot about suffering and that no one is immune to it. In the group, they memorize a key truth right away from the story of Joseph in Genesis 50: “What you meant for harm, God meant for good, not just for me but for the salvation of many.”

“New Hope slowly uses the seven stories to walk them through how God is good, how he is redemptive and how he allows things to happen, but in the end he gets the glory,” Rebecca said.

When a trauma-healing group first begins to meet, the people who come have a tough exterior, Rebecca said. They’ve learned that for day-to-day survival. But as they move through the Bible stories and the healing activities, the walls begin to come down and they share their stories and open up about their grief.

“They’re just such strong, stoic people,” she said. “But eventually Scripture softens your heart and the Holy Spirit speaks to you and allows you to tell your story, and that’s when the emotions come.”

Rebecca said her heart is for their national partners living out in the camps to be equipped so they can share the stories in their own language and culture in a way the Shapleys aren’t able.

That’s where Deborah comes in.

The 61-year-old widow is a “mighty woman of God,” and she feels like God has her in the camp for a reason, Rebecca said. Deborah is now taking the New Hope oral curriculum and reproducing it across the camp.

“She lives as a refugee out in the camps, and she is one of the most evangelistic people I have had the honor of being around,” Rebecca said. “They love her and respect her because of her age, so she is able to go and minister in a lot of ways with women.” More than 120,000 people live in the Rhino Camp Refugee Settlement in Uganda, and almost all of them have faced trauma of some kind as they fled their countries. IMB missionaries are using a trauma-healing curriculum called New Hope to share oral Bible studies that can be spread across the camp and help hurting families find healing in the gospel.

That matters especially right now while the Shapleys aren’t able to go into the camp. For the past couple of months, the use of public transportation and personal vehicles has been restricted because of COVID-19.

“We have used the time away from our friends and ministry partners to pray more specifically for their walks with the Lord, for their obedience to love and share the gospel with those around them, and for continued joy in the midst of suffering,” Rebecca said. “We are trusting that just as the Lord has spoken to our hearts during this time of uncertainty and isolation, that He is also speaking to the hearts of the refugees. We are excited for the day that we are allowed to fellowship once again with our friends and hear all that the Lord has been doing.”

They also have a new story set from New Hope specifically tailored to the uncertainty of the pandemic that they will be able to use once they’re allowed to travel again.

In the meantime, the Shapleys are trusting that the gospel is continuing to go out in the way they saw it going out before—with people walking hours through the camps sharing the Bible stories they’d heard, stories that had brought them healing and new hope through the gospel.

“It’s nothing we do; we’re not trained professional counselors,” Rebecca said. “It’s basically just a love for the Lord and a love for the lost. You take Scripture and serve as the voice for God’s Word, and the Holy Spirit does the rest.”

Grace Thornton wrote this story for the Southern Baptist Texan.

You can give now to support the work of developing Bible stories for refugees and others in West Africa. Read more about Bible Stories to Reach West Africa.

Learn more about ways to minister to refugees and workers among them.