Give Now
Holy Ground: The Importance of Mosques, Mecca, and Medina for Muslims
By Ralph Adair
Northern African and Middle Eastern Peoples - Updates

Holy Ground: The Importance of Mosques, Mecca, and Medina for Muslims If you ever need help remembering the sacred spaces for Muslims, just think of the three Ms: mosques, Mecca, and Medina.

The most common Islamic holy site is their place of worship: the mosque. Muslims are required to pray five times a day, and though Muslims can pray anywhere, dedicated Muslims strive to participate in the prayer time inside the mosque. Every Friday, Muslims meet at the mosque for special prayer and teaching from the imam, the local Islamic leader of the mosque. Most mosques have classes on the Qur’an, the Muslim holy book, for children and new converts to the Islamic faith.

Muslims consider every mosque a holy place. There are two mosques, however, that, due to the history of their geographical locations, are the most significant: the Al-Haram Mosque in Mecca and the Prophet’s Mosque in Medina. Understanding these two mosques and the cities that host them can help Christians gain a better understanding of the Islamic faith and know how to reach out to Muslims with the gospel.

Mecca: The Heart of Islam

The geographical heart of Islam lies in the city of Mecca, Saudi Arabia. Muhammad, who founded Islam and is considered by Muslims as the final and greatest prophet of Allah, was born in Mecca in AD 570. The city contains the Cave of Hira, where it is believed by Muslims that Muhammad received new revelation from Allah. This revelation was written down and collected by the prophet’s followers to form the Qur’an.

Initially, the people of Mecca rejected Muhammad’s teaching because he taught a strict monotheism, which threatened their polytheistic belief system and culture. Eventually, however, after fleeing Mecca due to persecution for his new beliefs, Muhammad returned with an army of followers and conquered Mecca in the name of Islam.

One of the five pillars, or practices, of Islam is the hajj, a pilgrimage by Muslims to the city of Mecca and the Al-Haram Mosque, also known as the Great Mosque or Sacred Mosque. The Great Mosque is the largest mosque in the world, built to accommodate all who participate in the hajj. 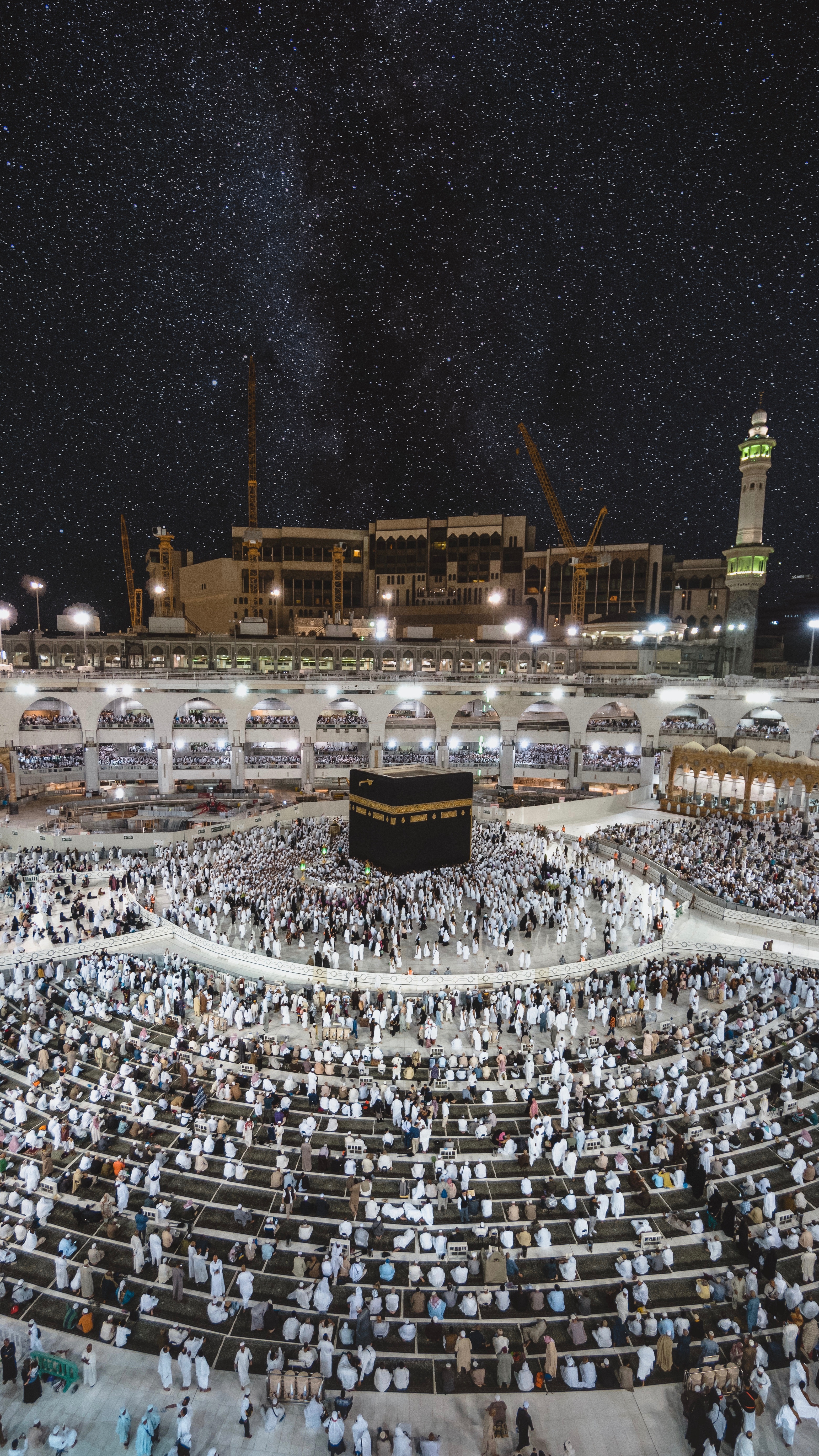 Muslims make hajj, or pilgrimage, to the Great Mosque in Mecca. They circle the Kaaba—the black cube in the center of the mosque—while saying prayers to Allah. Photo by Izuddin Helmi Adnan on Unsplash.

This journey to the mosque is for worship and should be made during the last month of the Islamic calendar. Muslims believe completion of the hajj brings forgiveness of sin and moves them closer to reaching paradise after death. Every adult Muslim who is healthy and has the financial means to take part in the hajj is expected to do so. Women are to be accompanied by a male relative. Each year, approximately two million Muslims from all over the world participate in the hajj.

The holiest of all Islamic sites is the Kaaba, a cube-shaped building covered in black cloth located at the center of the Al-Haram Mosque. Muslims believe that, according to the Qur’an (2:127; 22:26; 3:96), the Kaaba was built by Abraham and his eldest son Ishmael for the purpose of calling the people of Arabia to make a pilgrimage to the Kaaba for worship.

Muhammad, having rid Mecca of the polytheistic practices that had developed since the time of Abraham, reclaimed the Kaaba in the name of Allah and reinstituted the call for pilgrimage, thus marking the beginning of the Islamic hajj. Islamic pilgrims walk around the Kaaba counterclockwise seven times during their journey. They direct their Salat, the daily required Islamic prayers, toward the Kaaba as they walk.

The second holiest Muslim city is Medina, where the Prophet’s Mosque—Al-Masjid an-Nawabi—is located. Medina was the place to which Muhammad fled from persecution when he started having his revelations from Allah. Supposedly, Muhammad built the mosque next to his house upon his arrival in Medina. Muhammad and his message were well received in Medina, so he was able to form a following of people who would help him spread his message. Muslims also believe Muhammad received some of his final revelations from Allah in Medina. The Prophet’s Mosque, first built by Muhammad in AD 622, is now one of the largest mosques in the world. Photo by Konevi on Pixabay.

The Prophet’s Mosque contains the burial place of Muhammad. During several reconstructions of the mosque, it was expanded to include the grave of Muhammad and his two successors, Abu Bakar and Umar. The grave is identified by a Green Dome, constructed in the early nineteenth century. The Rawdah—garden in Arabic—is a green-carpeted area next to the burial site inside the mosque. Muslims believe that prayers of supplication offered up in the Rawdah are never rejected, making it a high-priority destination for pilgrimaging Muslims.

Only Muslims are allowed to visit the mosques of Mecca and Medina. However, a basic understanding of these sites and mosques, in general, can help Christians dialogue with their Muslim friends and neighbors with the gospel. Christians who aren’t sure how to start spiritual conversations with Muslims can ask them about these Islamic holy sites.

For instance, a Christian may ask their Muslim friend, “Have you ever taken part in the hajj and visited the Great Mosque? If so, why did you go?” A question like this can spark healthy dialogue between Christians and Muslims.

As noted earlier, Muslims believe partaking in the hajj provides the forgiveness of sin. So Christians, via a discussion about the hajj, can share with their Muslim friend that Christ taught that forgiveness of sin comes from faith in his death and resurrection rather than from the completion of good works or religious rituals. Understanding Islamic holy sites and the rituals that take place there can help Christians draw important contrasts between Islam and Christianity—contrasts that need to be clearly recognized so the gospel can be made clear.

Finally, knowing the location of local mosques near you can prove very helpful for churches and Christians committed to sharing the gospel with Muslims. Since Muslims gather together and often live near their local mosques, Christians can identify areas most likely to contain a high Muslim population and intentionally bring the gospel to those areas.

Islam is the second largest religion in the world, and mosques filled with Muslims cover the globe. Christians have the responsibility and blessing to be ambassadors for Christ among Muslims wherever they are.

Ralph Adair serves with his wife, son, and three daughters in South Asia. Their heart is that all South Asian peoples come to saving faith in Jesus. Ralph has a master of divinity degree and a PhD in missions from Southwestern Baptist Theological Seminary.