Give Now
I Toured the Tabernacle in Israel: Here’s What I Learned About Missions [Photo Gallery]
By Madeline Arthington
Arts & Culture

I Toured the Tabernacle in Israel: Here’s What I Learned About Missions [Photo Gallery]

Even though English is my first language, I sometimes find it inadequate. I catch myself plugging in words and phrases from my other language—words that nail just what I want to say.

The apostle John did the same thing. In his gospel, John wrote in Greek but used a word he borrowed from the Hebrew language. When he proclaimed that Jesus dwelt among us, he said that Jesus “tabernacled” among us (John 1:14). Why would John use the word tabernacle? What is so important about the Old Testament tabernacle, and why should we as New Testament believers understand its role and purpose?

I recently toured a life-size replica of the tabernacle in the wilderness of southern Israel. Here is what I learned. A replica of the tabernacle that represents where Israelites under the old covenant approached God and were cleansed from sin. All photos by Patrick Royals.

The tabernacle was a movable tent and courtyard built to God’s specifications with items used for the sacrificial work of the priests. God wanted to dwell among his people, but there was a problem­­. The issue was the people’s rebellion and sin, which caused them to miss the mark of God’s holiness, and this separated them from God and brought on condemnation.

God’s holiness sets him apart from everything else. Within the tabernacle, God revealed his presence in a room inside another room that was closed off from everyone else—all because of the problem of sin.

When God banished Adam and Eve from the Garden of Eden, he cast them out of his presence and stationed cherubim on guard (Gen 3:24). With the ordering of the tabernacle, God cracked open the door for a relationship with his people through a system of sacrifice.

Here are the main items inside the tabernacle and their appointed purpose.

The altar of burnt offerings was stationed inside the tabernacle courtyard. God himself sent heavenly fire that continually burned on the altar (Lev. 9:23–24; 6:12). No manmade fire was allowed for sacrifice. 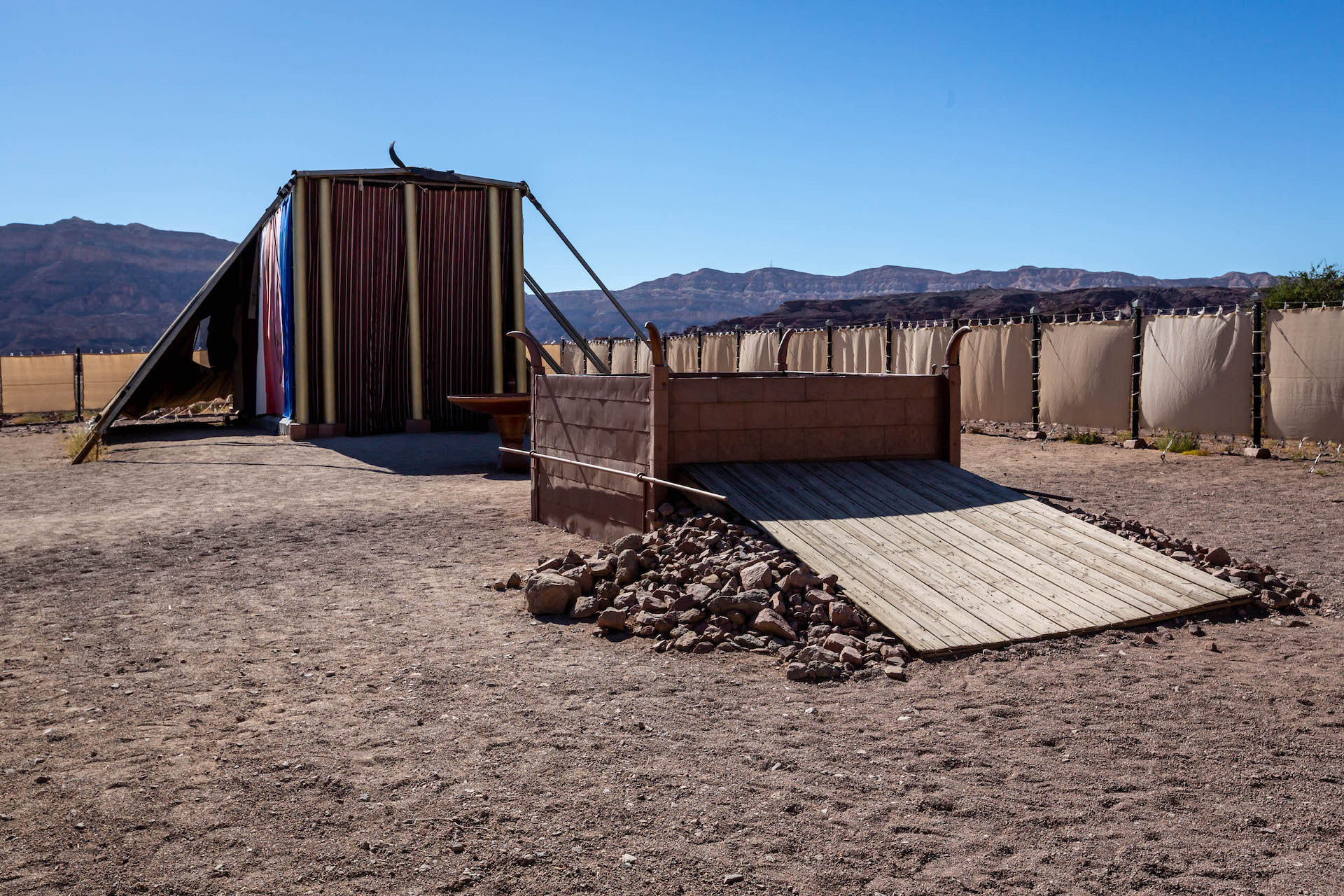 The altar (front) and tabernacle replicas in Israel.

A guilty person brought an animal for a sin sacrifice to the tabernacle. After the animal was killed near the gate, the priest brought its blood and fat to the altar. He burned the fat on the altar and poured the blood on the golden horns and around the altar (Lev. 4). Israelites sacrificed animals and brought their blood to an altar like this to atone for sin.

At the tabernacle, blood was not a side effect—it was the whole point. Only blood could provide atonement. God says in Leviticus 17, “For the life of a creature is in the blood, and I have appointed it to you to make atonement on the altar for your lives, since it is the lifeblood that makes atonement” (HCSB). The Hebrew word for atonement literally means “to cover.” God appointed the blood to cover our souls. The wash basin replica demonstrates where priests cleansed themselves before entering the temple.

Being clean was a serious matter. Whenever the priest entered the tabernacle or approached the altar, he washed in the bronze wash basin in the courtyard (Ex. 30:17–19). God warned the priests that they must be clean or they would die (Ex. 30:21). They had to wash every time because God required perfect purity for those who approach him. No single washing could ever accomplish complete and final purification. The lampstand replica, representing the only source of light for a priest in the tabernacle.

All Levites could enter the courtyard, but only priests could enter the Holy Place in the tent itself. Inside the Holy Place was the lampstand, one solid piece of hammered gold that burned continually (Ex. 25:31–40). It had three branches off each side of the central trunk, totaling seven branches with decorative almond blossoms. The lampstand looked like a tree, reminiscent of the tree of life in the garden—a place of life, blessing, and perfect relationship with God. It was the only source of light in the Holy Place.

The Table of Showbread 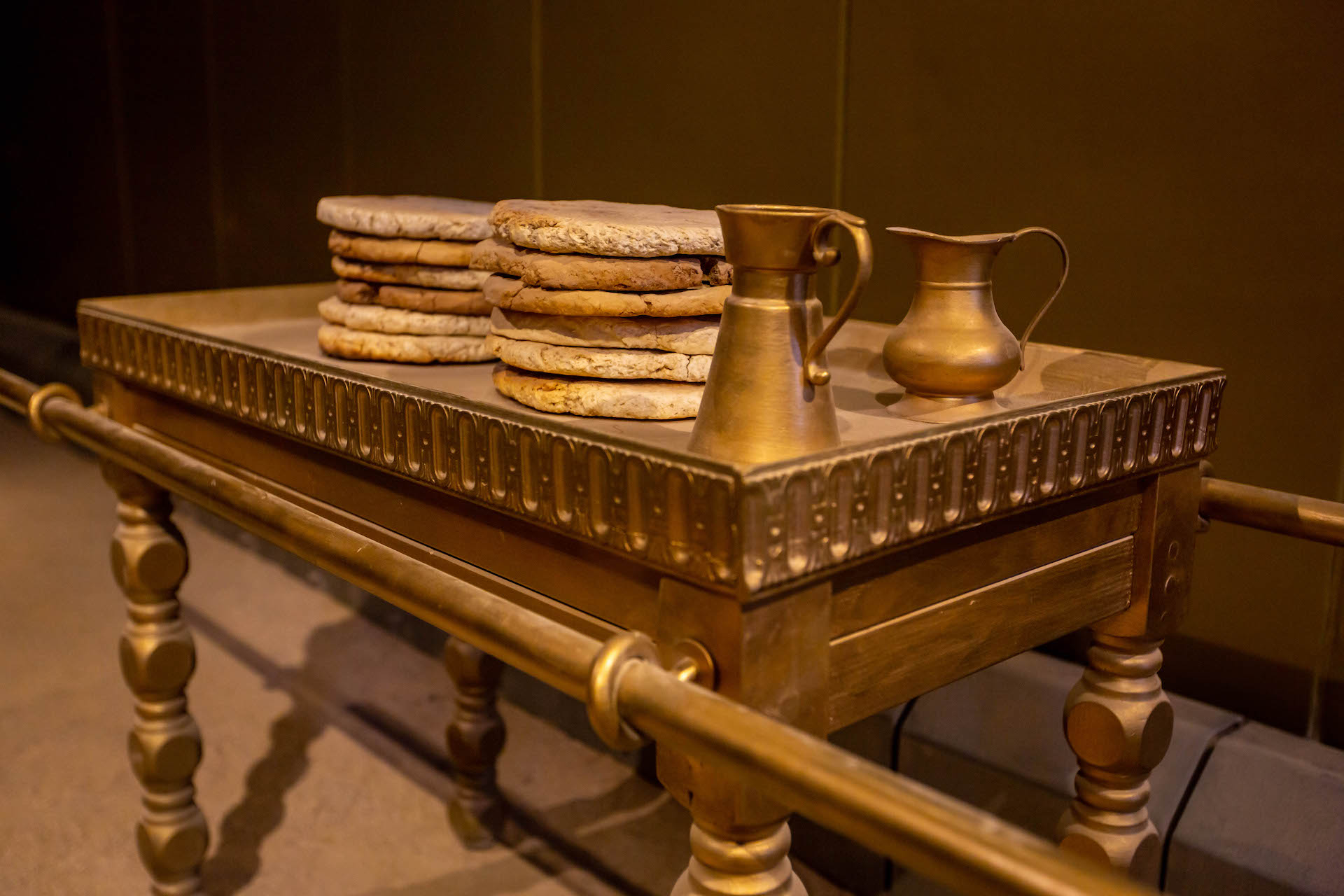 The replica of the table of showbread represents many truths, including God’s desire for intimacy with us.

The table sat on the right side of the Holy Place and was made of acacia wood and covered with gold. The twelve pieces of bread on the table represented the twelve tribes of Israel, God’s provision for his people, and the intimate communion between God and his people. Every Sabbath, the priests entered the Holy Place and ate and replaced the showbread, also called the “bread of the presence,” or literally “the bread of the face” (Lev. 24:5–9). This is the same Hebrew word for how God spoke to Moses, “face to face” (Ex. 33:11).

The Altar of Incense The altar of incense replica demonstrates where priests offered their prayers on behalf of the people.

During sacrificial rituals, the priest smeared blood on the horns of the altar of incense, and in cases when the priest himself had sinned, they poured blood around its base (Lev. 4:7,13–18).

David often described prayer as like incense going up before the Lord, offered by a priest on behalf of the people (Ps. 141:2).

The Veil, Ark, and Mercy Seat This curtain is similar to the one that tore from top to bottom when Christ declared, “It is finished!”

Inside the tabernacle, a curtain separated the daily work in the Holy Place from God’s presence in the holy of holies. Embroidered on the curtain’s fabric were the cherubim who stood guard at the entrance to the Garden of Eden. They were also represented by golden statues over the ark. The replica of the ark of the covenant demonstrates where God’s limited glory would descend.

The ark of the covenant was the only item inside the holy of holies. It was made from acacia wood and covered in gold. On top of its lid, called the “mercy seat,” were cherubim with their wings spread out (Ex. 25:10–22). It was here between the cherubim where God made his presence known in a limited way, only once a year to the high priest. Stone tablets, a staff, and manna were kept inside the ark to remind the people of their rebellion and God’s provision—physical and spiritual.

The ark contained the stone tablets as a witness against the people (Ex. 25:16; Deut. 31:26), a bowl of manna to remind the Israelites how God provided (Ex. 16:33), and the staff of Aaron to remind them not to rebel against God (Num. 17). These items testified against the people like a witness in a courtroom. The people were sinful. They were guilty, and they needed atonement. The mercy seat protected them against the condemnation of the witness. If they were exposed to God’s Law, with no atonement and no blood, they faced condemnation and judgment.

Once a year, the high priest entered the inner room called the holy of holies for the Day of Atonement. Even the high priest, however, was sinful and needed atonement before he could approach God. Only after offering an animal sacrifice for himself could he offer atonement for the sins of the people.

Dressed only in white, the high priest entered the holy of holies with incense whose smoke would fill the room, obstructing his view from the glory and presence of God. The Bible warns that the high priest would die if he didn’t light the incense first (Lev. 16:13).

While the high priest was in the holy of holies, he sprinkled blood on the mercy seat (Lev. 16:14). This act brought temporary forgiveness of the people’s sins until the next year when it would all happen again.

Christ In the Tabernacle

In each activity and item of the tabernacle, God shows his character and desire to be with his people. Atonement must happen through the shedding of innocent blood. This is what the tabernacle was all about.

“For hundreds of years, the high priest entered the Holy of Holies to make atonement for the people. Each year, nothing changed.”

The high priests offered bulls and goats for their own sins and the sins of the people. Jesus did not need to offer a sacrifice for his own sins because he was sinless. He did not need to offer an animal sacrifice for the sins of the people. When Jesus died on the cross, he offered himself as the Lamb of God who took away the sins of the world. He is the light of the world. He is the bread of life, broken for us. He is the living water who cleanses us from all unrighteousness. All who feed on him through faith will have eternal life (John 6:51).

When Jesus died, the curtain separating the Holy Place ripped from top to bottom, opening the way to finally stand in God’s presence. The author of Hebrews wrote, “We have boldness to enter the sanctuary through the blood of Jesus, by a new and living way he has opened to us through the curtain, (that is, his flesh)” (Heb. 10:19–20 HCSB). Not only that, but those in whom the Spirit works no longer have hearts of rebellion. They have new hearts that trust in Jesus and delight in obedience.

When Jesus died, he finished the work of atonement once and for all when he said, “It is finished.”

Yet the story isn’t over.

In Revelation, John continued with the idea of tabernacle. He showed us a glimpse of heaven in the new Jerusalem, and used the same word when he writes God will “tabernacle” with his people (Rev. 21:3). God will dwell among his people forever.

This is not only key for rejoicing in our own salvation; it is vital for interacting with our Jewish friends. The more we study and understand the connections between the tabernacle and Christ’s work, the more we can be a faithful witness of the gospel.

In the new Jerusalem, all who believe in Jesus will be in God’s presence. They will feast at his table. Christ will be the lamp, filling the city with light. The previous things will have passed away, and God himself will tabernacle with his people forever.

Madeline Arthington is a writer with IMB. She lives in Central Asia.

Patrick Royals is a media specialist and photographer serving with IMB in Europe.