IMB missionaries Andy and Marie Hoffman served more than 11 years without seeing any fruit among their unreached people group (UPG) in North Africa. During those years, the family and their partners built relationships and shared the gospel with these nomadic farmers and desert horsemen.

It wasn’t until the culmination of their hard work was almost complete that they saw nationals come to saving faith. Andy, with the help of national believers, finished a translation of the Scripture into the heart language of this predominately Muslim people group. 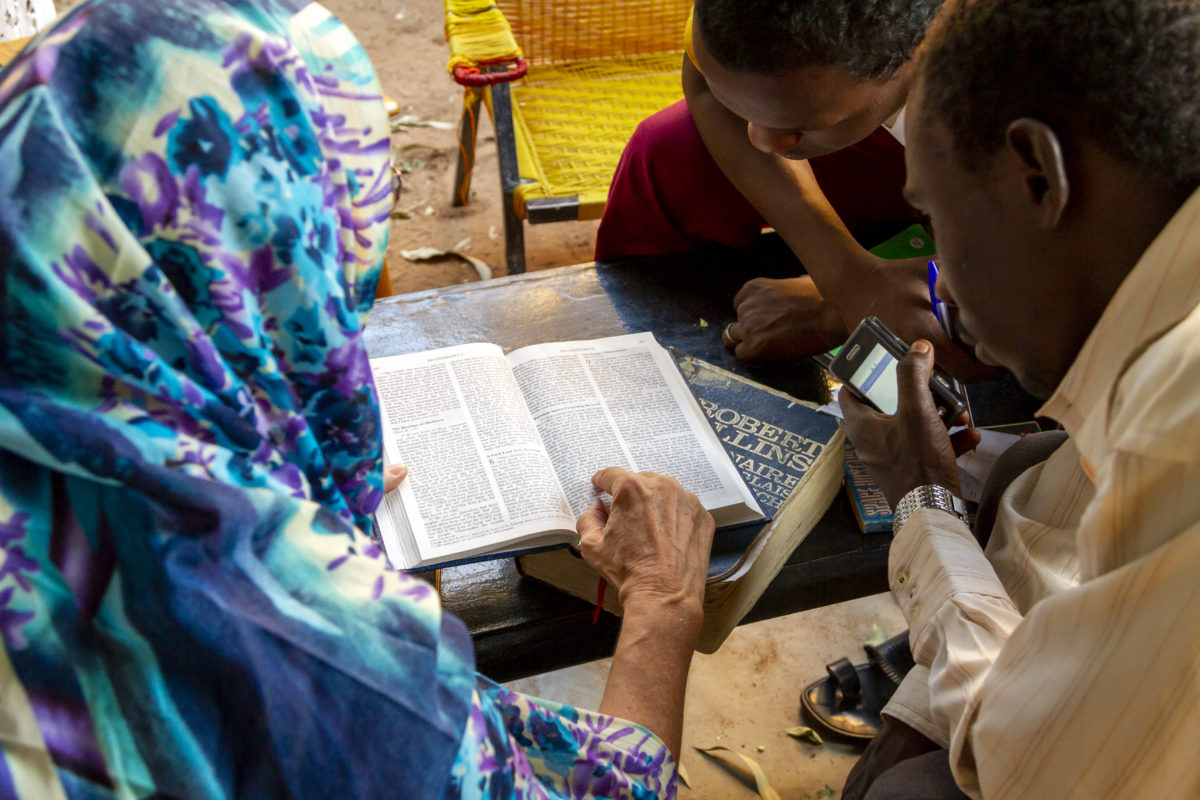 Andy and his team released the Scriptures, book by book, on a website they dedicated to the project. The people the Hoffmans work with are a largely oral people, with many of the older generation not knowing how to read, and many of those who do know, simply choosing not to. Therefore, each book is recorded after it is translated. During the first few years of the project, the books were released on cassettes, CDs and even solar powered MegaVoice devices, allowing the Scripture to reach generally inaccessible places.

The translation team began in Genesis, working their way through the books of the Bible in order. This allowed them to start with the foundations of Scripture. It also allowed them to build the trust of those they were trying to reach, because Muslims largely agree with the Old Testament stories.

As they were completing the project, Tom, one of the new believers and a fellow translator, asked a question that was “like an arrow that hit me in the heart,” Andy described.

Tom continued, “Why did it take you so long to get here and bring it to us?”

Stunned, Andy explained that he came to live among Tom’s people group when he was 29 years old. He’s been there for the last 18 years. “I couldn’t have come much sooner.”

“No, I mean, how long has America had the Bible?” Tom pressed. “Our parents and grandparents – they never, ever got to hear.”

Andy replied, “You’re right. We held on to it too long. Praise God, it’s here, working among your people now. Let’s not be guilty of holding on to the Bible in your country. Let’s reach the other languages who still don’t have it.”

And reaching other similar languages is exactly what Tom is doing. He’s now working on a translation of the Scripture into a dialect that’s similar to Tom’s heart language, but still different enough a Bible translation would be helpful for the spread of the gospel.

Tom is also the first theologian the Hoffmans are aware of among their people group. He’s working on Bible commentaries in his heart language.

Tom wasn’t always such a helpful resource or even a believer. In fact, for many years, the Hoffmans saw no one come to faith.

They’d share the gospel over and over, and they’d hear the same rebuttal – in the Islamic view, Jesus did not die, so there could be no burial and resurrection. And as far as sin is concerned, only murderers and adulterers are sinners. The Hoffmans knew if they could not get people to understand these core tenets of Christianity, there would be no hope for the people they labored among.

Discouragement was real, and with each newsletter they wrote home, they questioned if they were supposed to stay and finish this work.

After the translation was almost complete, a group of five nationals came to Andy, professing faith. They asked to be baptized. Tom was among them and came out of the baptismal waters audibly rejoicing.

Tom’s life was transformed from the inside out. One day, he came to the Hoffmans, saying he needed to confess something. Public confession of sin was practically unheard of in this culture.

Sometimes, Tom missed work as a translator never explaining his absence. During those times, he’d been doing an illegal, but lucrative, activity on the side.

“As we go through the Bible daily, I realize I can’t do this anymore. It’s wrong; it’s a sin,” Tom said.

Not long after, Tom’s wife became ill. The Hoffmans were afraid he’d return to this illegal side-hustle to afford treatment. Tom, however, remained convinced that the Lord would provide. And God did! Tom received a promotion at another job, providing more stability and significantly more money.

Slowly over the last couple of years, others have come to faith, starting house churches. One family in a house church baptized six in a blown-up kiddie pool in their living room. They’ve seen other families’ tumultuous relationships restored through the power of the gospel. They’re now witnessing national believers profess their faith on YouTube, using their voices and even faces, sometimes at great risk. These believers are saying, “I’m from this country, but I’m a Christian and I believe in Christ.” These national believers are withstanding persecution because of this.

The Hoffmans are convinced the difference, from the years of no fruit to the Spirit softening hearts and drawing them to Himself, is this: These people now have the Word of God.

“It makes perfect sense,” Andy said. “We weren’t seeing people come to faith because they had no Bible.”

Now that this people group has access to the Word of God, “The power of the Holy Spirit is working through the Word.”

“…so shall my word be that goes out from my mouth; it shall not return to me empty, but it shall accomplish that which I purpose…” -Isaiah 55:11

Read more about how the Church Connections program is aiding the Hoffmans’ ministry.