The Anatomy of a Mosque

How would you feel if you walked past a mosque? Would you hesitate to take a step inside? Would you think twice about slipping off your shoes and leaving them by the door so that you could explore the space where Muslims gather for congregational prayer and worship?

If you feel reticent, you’re not alone. A lot of western Christians have never visited a mosque and don’t have a clear sense of what happens inside. But entering into a mosque illuminates a lot of important aspects of Islam that are helpful to understand if we hope to engage Muslims in meaningful conversation about their faith and ours.

An Invitation to Explore the Interior of a Mosque

If you’ve never visited a mosque, this is your invitation to come inside one of the most beautiful mosques in the world for a private tour. We asked a photographer and a videographer to travel to see the Suleymaniye Mosque in Istanbul, Turkey, so that we could bring the experience of being there to you. All photos by Kiara Marino.

The Suleymaniye Mosque was designed by the architect Sinan in the sixteenth century to honor the Ottoman sultan Suleyman the Magnificent. It is an exquisite example of classical Islamic religious architecture and it showcases several elements found in all mosques. Mosques are built to facilitate the devotional life of Muslims—particularly to provide space for congregational prayer. Salat, or ritual prayer, is one of the central aspects of Islamic practice and is the second pillar of Islam. Muslims are required to pray five times a day. Although they are permitted to pray anywhere, praying together as a congregation is preferred whenever possible to symbolize the unity of the Islamic community. So, the primary architectural demand for a mosque is that it must have a large central space for lots of men to gather together for prayer, especially on Fridays. A lot of people are surprised to learn that some of the elements we associate with classical mosque architecture were actually inspired by the design of Christian churches. The most stunning attribute of Suleymaninye Mosque—the central dome pierced with windows that light up the building’s interior—was inspired by the design of the Hagia Sophia, a nearby church built in the sixth-century. Sinan studied the structure of the Hagia Sophia and incorporated many of its architectural elements into the design of this mosque and others like it. Sinan’s style then influenced generations of Islamic architects after him.

Although the design of the dome is similar to a Byzantine church, the decoration is distinctly Islamic. The gold painting at the center of the dome features sacred calligraphy that incorporates a verse from the Qur’an that says “Indeed, Allah holds the heavens and the earth, lest they cease.” Not all mosques have a central dome, but the interior decoration always features verses from the Qur’an or the names of God in Arabic. One of the essential Islamic practices required for prayer to be acceptable to God is ritual purification. Muslims must wash their hands, arms, faces, and feet before praying. In the classical period, ablution fountains were located in the courtyard or along the sides of mosque buildings. In modern mosques, they may be found in the interior of a mosque complex. Muslims always remove their shoes before entering a mosque for prayer. The design woven into the carpet helps men stand in orderly lines during prayer. Mosques never have seats or pews like churches, because when Muslims pray they move. Standing, bowing, kneeling, and touching the forehead to the floor are all movements integrated into Islamic ritual prayer. The marble niche shown above is called the mihrab and it indicates the direction Muslims must face while praying. Muslims are required to pray in the direction of Mecca, where the Kaaba is located. The Kaaba is the holiest shrine of Islam because it signifies “the House of Allah” and is considered to be the throne of his divine presence around which all creation turns. 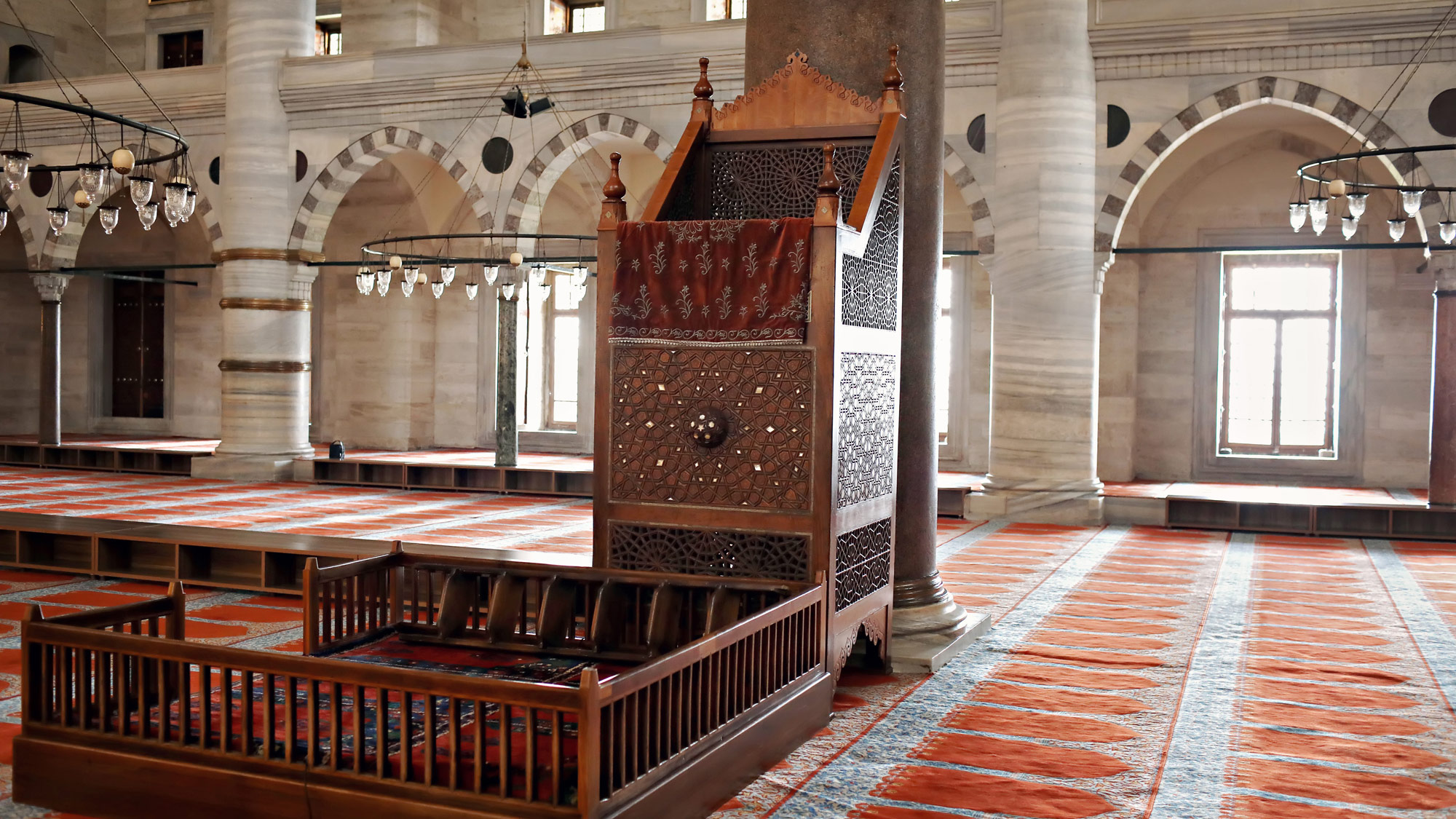 The mimber is a raised platform where imams give sermons on Fridays and during special events like Ramadan and the Feast of the Sacrifice. While the kursi, or chair, (shown above) is used by Islamic scholars to give lectures on religion and the meaning of the Qur’an, the Islamic holy scriptures. The Feast of Ramadan celebrates the revelation of the Qur’an to the prophet Muhammed in the seventh century. Islam prohibits men and women from praying together. So, mosques always provide a place where women can pray separately from men. In some mosques, women have a separate room for prayer. But in classical mosques like Suleymaniye, the women’s section is behind decorative screens in the back of the mosque. Women are not invited to attend congregational prayer on Fridays, the holiest day of the week for Muslims. Ramadan is a time of heightened religious consciousness for the 1.8 billion Muslims living today. And Islam is the fastest-growing major religion in the world. In fact, the number of Muslims is expected to exceed the number of Christians by the end of the century if current demographic trends continue.

Ramadan is a perfect time for focused prayer for God to exalt the name of Jesus in the Muslim world.

Photography by Kiara Marino. Video filmed by Ross Marino. Kiara and Ross and their family have served with IMB for the past five years, in Europe and now in Central Asia.

Video editing by Brandon Conners, a videographer and graphic designer for IMB, currently serving in Europe.