In what both IMB church planter Michael Harrington and national pastor Glyn Hackett describe as “post-Christian” France, the need for church planting is great.

Harrington, who has been a church planter in France for the past 12 years, believes that France was once “in a sense, a Christian nation,” he explains. While Catholicism dominated the religious background, there was a Protestant presence as well. In contrast, many in present-day France aren’t even familiar with the story of Jesus.

“France is well below the 2% evangelical Christian mark,” Harrington says, describing the spiritual climate now. “Even though we have a rich history of Christianity, today, the cathedrals are empty. The Protestant churches that do exist tend to be barebones at best. And the evangelical churches that we see are, in fact, growing, but they are very small and scattered.” 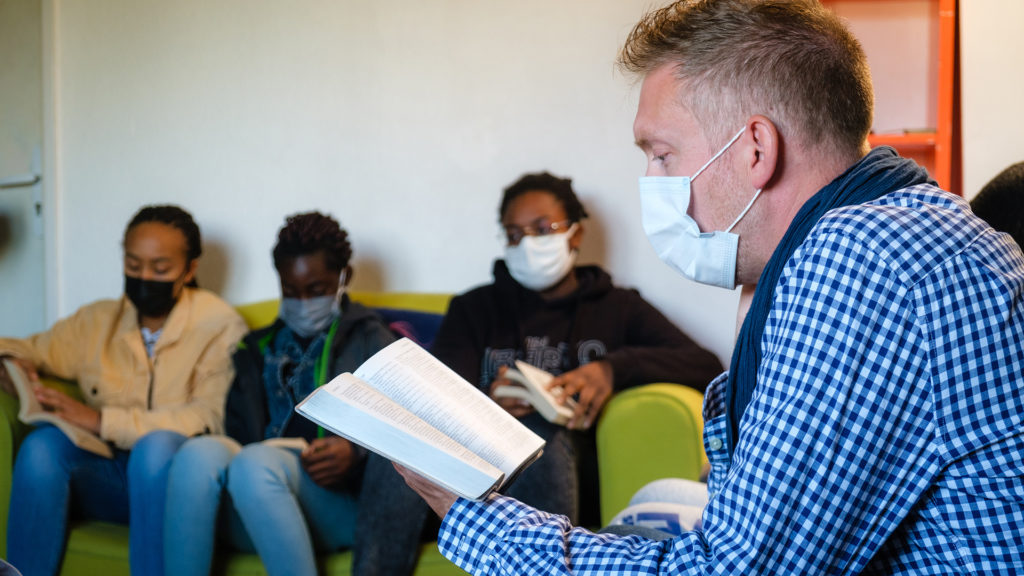 IMB missionary Michael Harrington leads a Bible study with the youth at the Baptist Church of Strasbourg, France. Harrington is a church planter partnering with the local French Baptist association to plant churches in the underchurched metropolis. IMB Photo

He continues, “There is a need for more churches in more areas reaching more people.”

“France is still one of the most atheistic countries in the world. There is spiritual hunger, a thirst, and a lot of it has turned toward various forms of occultism,” Hackett explains.

However, because of the disillusionment with formal and empty religion among the French people, Hackett senses that his people are wanting to turn toward “something much more personal and relational with God.”

Hackett believes that church planting in his city and the region beyond is the key to effective evangelism. Two young women sit on the banks of the Ill River in Strasbourg, France, and eat a picnic lunch with a French flag in the foreground. IMB Photo

Large parts of the country have no evangelical presence. In Strasbourg, there is less than one evangelical church for each 10,000 residents

Hackett continues, “People need to see a localized expression of Christian faith, a vibrant expression of faith, in the local community.”

Hackett also believes that this church-planting movement is best done in partnership with IMB missionaries he works closely with.

“I’m not a missionary. I was a teacher here, and then I became a pastor; I’m paid by the church. But the missionaries who come in, they bring in ideas and a freshness and a new look at things. And that helps to give things momentum.”

When the missionaries present a vision that Hackett’s church can get behind, his members begin to think, “All right, we can do it. So that’s how it works; let’s go!”

Training church planters in the pews

With willing French national church members in mind, a church-planting training was designed by Conseil National des Évangéliques de France and is offered regionally where there’s demand throughout France. Sunday morning worship led by pastor Glyn Hackett at Strasbourg Baptist Church in Strasbourg, France. The urban church holds services in French but has about 20 different nationalities represented among its members. IMB Photo

Harrington, as an IMB church planter, is leading a team of 12 from Église Évangélique Baptiste de Strasbourg through the program. His team includes four missionary colleagues as well as eight national believers. Across the region, around 30 are taking part in the training, and more than a dozen are being trained in Southern France as well.

“Together with a handful of local pastors/leaders, we have a vision to see a church planted in every neighborhood of our city, as well as people being trained and sent to villages, other cities and other regions,” Harrington explains.

This two-year curriculum combines one full day of classroom learning per month, three weekend retreats per year, and monthly reading and practical assignments throughout.

He shares, “This first session was enthusiastically received and there is a great spirit of unity, energy and hope amongst us.”

The goal is to train the French church to plant French churches, thereby reaching their own people in a way outsiders simply cannot.

“I think that effective church planting in France must come from the French people. I’m here because the French church requests and desires help from outside; desires a bit of a push in some areas. We’re able to provide that,” Harrington says.

He continues, “But no matter how long I live in France, no matter how much I study the French language, I will never be French. The French people will hear the gospel most clearly, most convictingly and convincingly from other French believers. We really do want to equip, work with, and really push to the forefront the French national believers here in the country.”

Harrington asks for churches in the United States to pray for the work his team is doing.

France Church Planting Training Center
$41,411 of $198,000 goal
Give Now
or
Share Now
IMB is a 501(c)3 charity. Your gift is tax-deductible as allowed by U.S. law. No goods or services will be provided in exchange for this gift. The IMB handles all gifts according to government regulations and is professionally audited each year.

“France is an incredibly apathetic country and there is no perfect method to cut through apathy like prayer. We need prayer to reach the French people. It is God and God alone who will change hearts.”

Faithful giving to the Cooperative Program and the Lottie Moon Christmas Offering® sustains the work of missionaries like the Harringtons. You can also give directly to the France Church Planting Center.

Max Power is a multimedia project specialist for the IMB serving in West Africa. Myriah Snyder is senior writer/editor for the IMB.