Last year there were few-to-no followers of Christ among the Manyika of Mozambique. This past July, a group of four bowed their heads and prayed to receive Jesus as their Savior. Their eyes shone bright with hope. Their smiles unending because their eternity was forever changed. They joined seven others living in this remote interior strip of Mozambique to make this decision in the last few months.

International Mission Board missionaries Ryan and Aubrey Curry rejoiced with the new believers as they walked over to the others hanging out in the shade. The group milled around talking about the Bible lesson on Adam and Eve and the fall of man. They had a few more questions for the Currys and their national partners. 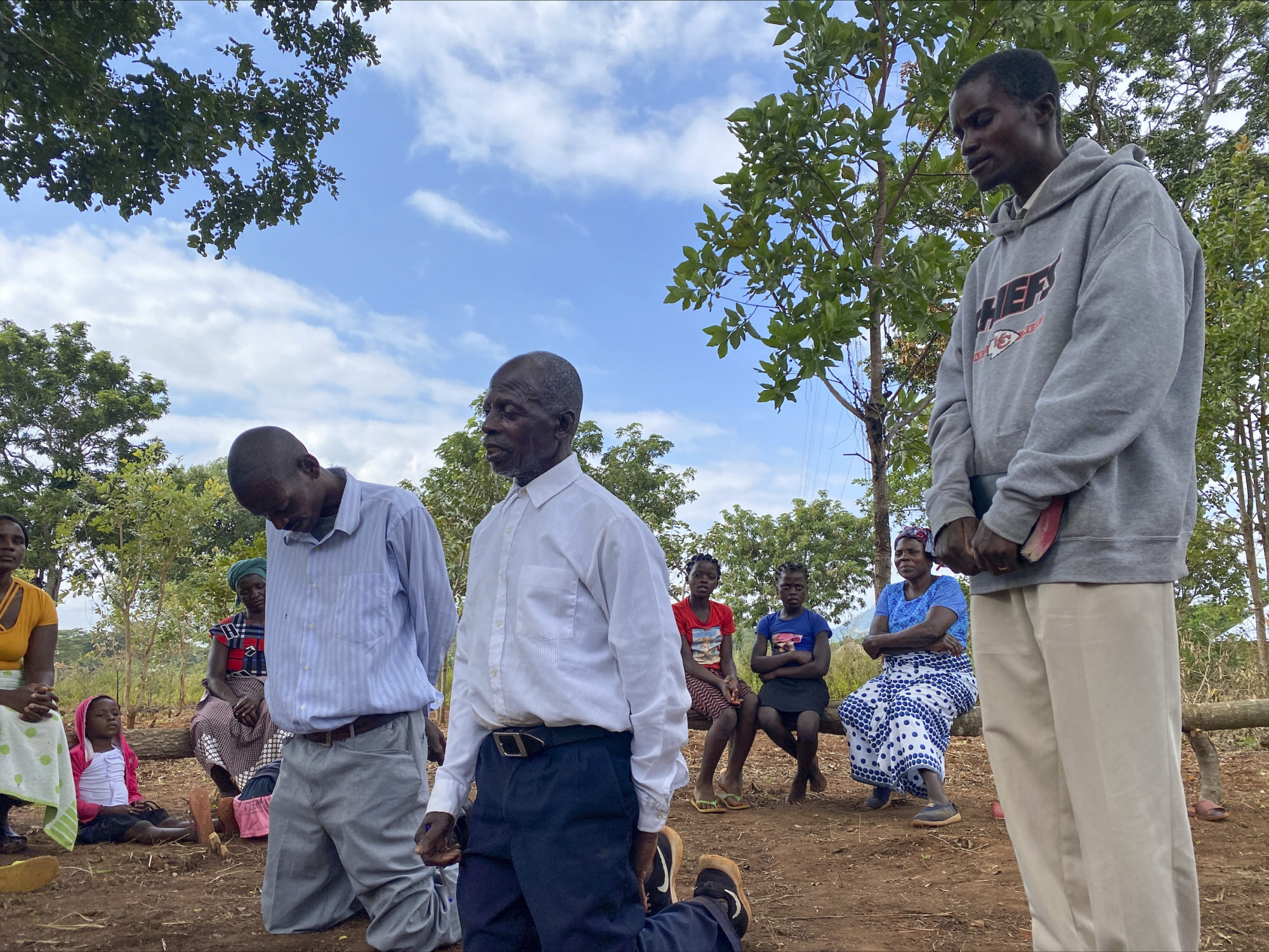 With each return visit to where the Manyika live in Mozambique, more people attend the chronological Bible storying session. It’s a three-hour trip one way and well worth the time, according to IMB missionaries Ryan and Aubrey Curry. With each visit, someone professes a faith in Jesus that changes lives. The trip is long enough that they can only make the trip once a month. IMB Photo

“We’ve never heard stories like these in our lives,” one man said about the chronological Bible storying session. “Are you coming back to tell us more?”

His words squeezed Aubrey’s heart, her compassion for sharing the gospel with those who have never heard flowed. All she could think about was at this time last year, the Manyika were considered an unengaged, unreached people group — meaning there was no strategy to take the gospel to them and less than 2% of the 200,000 Manyika claimed to be evangelical. Moving the Manyika from the “unengaged” to the “engaged” list began in 2020 when IMB missionaries in Sub-Saharan Africa asked Southern Baptists to join them in reaching 55 groups identified as unengaged through prayer and action.

Statistics show more professing Christians live in Africa than any other continent, yet large groups of people remain where the gospel has not gained traction. Many of these are like the Manyika of Mozambique. They live off the beaten path; roads don’t always lead to their villages. On the first survey trip to find the Manyika of Mozambique, IMB missionary Ryan Curry volunteered to go with a local pastor in his city in Mozambique riding tandem on a motorbike. IMB Photo

When Ryan and local pastors in his city first talked about establishing a solid gospel presence among the Manyika, no one even knew how to get to them or the condition of the road. The young missionary and a pastor friend volunteered to take a survey trip to gather information about these people. They also needed to visit the village high chief to gain permission to be in the area – an expectation common in this culture.

The two men bumped their way up the road, riding tandem on a dirt bike. It was slow going as they dodged holes and debris. The Manyika live in the low mountainous region bordering Zimbabwe. Almost three hours into the trip, the men discussed turning around to go back home. They had not been able to visit the high chief in person nor seen many other people. The pastor suggested they go just a little further.

That’s when an isolated mud and thatch home came into view. A woman came out to greet them in a tribal dialect and not the national language of Portuguese.

“She sat with us and we shared the gospel,” Ryan said. “She agreed with everything we told her about Jesus but couldn’t accept Him that day because her husband wasn’t present. We promised to return.”

It wouldn’t happen for months, though. Rainy season made the roads impassable. But it was during this waiting period that the Manyinka went from unengaged to engaged. The survey trip gave the team enough information to plot out a ministry strategy. They sought the proper paperwork and permission from government officials to be in the area teaching. They prayed for God to prepare a “person of peace” within the Manyika community who would welcome them and help gather people.

When the road was dry, they were ready to head back. This time Ryan and the pastor took a car over the rough road so their wives could join them. They located the woman again, fulfilling their promise to return.

“Aubrey and the pastor’s wife were able to speak woman-to-woman to her. That makes a difference in this culture,” Ryan said. With each visit Ryan and Aubrey Curry make with their national partners to the Manyika of Mozambique, more people gather to hear Bible stories. Just last year, these peoples were considered unengaged and unreached. This means there was no strategy for taking the transformative message of the gospel to them. Now, there is not only a strategy but 13 have chosen to follow Christ and be discipled. IMB Photo

Some neighbors saw the visitors and came over to see what was going on. They, too, listened to the gospel message. That day, four people prayed to receive Christ. One man asked them to return, promising to gather more people. Aubrey looked over at her husband smiling. God more than answered their prayers for a person of peace. He provided two — a man and woman.

Just over a month later, the team returned to a gathered crowd. During their absence, the team recorded stories in the local dialect, Shona, so they could leave the gospel stories in the village. Aubrey pointed out that many in the area do not read or have access to a Bible, even though there is one in their language. The recordings were a way for the group to continue learning between lessons.

“It was fun bringing Bibles in their language,” Aubrey said. “They were so excited to have both the audio recordings and written Scripture.” Last year there was no strategy for engaging the Manyika of Mozambique. IMB missionaries Ryan and Aubrey Curry and local pastors found a way to get to this hard-to-reach area and shared with those who have never head the gospel. IMB Photo

The mission team continues to visit. With each monthly visit, more people choose to follow Jesus. A steady flow of new people attend the gatherings so the group is considering becoming a church.

Ryan pointed out right now is a crucial time in this ministry. Cult-like groups and false prophets are common in this area and often cause confusion.

“They are deciding what they will believe and follow,” Ryan said. “What they need right now is someone to teach the Word of God and help them understand it.”

As the Currys prepare for an extended time in the United States, they ask Southern Baptists to pray for a local pastor or believer to take on the task of raising biblically sound Manyika leaders. This is a big commitment involving long and rugged hours of travel on public transport. Pray for these peoples to one day be taken off the “unreached” list and be the ones engaging their neighbors with the gospel.

Click here to support the missionaries you read about in this story.

Reach Unengaged Peoples Across Sub-Saharan Africa
$121,894 of $177,500 goal
Give Now
or
Share Now
IMB is a 501(c)3 charity. Your gift is tax-deductible as allowed by U.S. law. No goods or services will be provided in exchange for this gift. The IMB handles all gifts according to government regulations and is professionally audited each year.

Download resources on the Manyika of Mozambique and other UUPGs in Sub-Saharan Africa.